OstroVit Krill Oil is a dietary supplement in softgel capsules containing Antarctic Krill oil. It is a mix of unsaturated fatty acids EPA and DHA from the group of Omega-3, phospholipids and astaxanthin - a carotenoid considered one of the best antioxidants. Its high-availability is dictated by the content of fatty acids in the form of a phospholipid (fatty acids with a phosphate group). This supplement is ideal for anyone who shows an increased need for EFAs, that is essential unsaturated fatty acids.

Euphausia superba or Antarctic krill is a small crustacean whose species inhabited almost the entire Southern Ocean. The high concentration of omega-3 acids in the form of phospholipids and the content of astaxanthin is of great importance in the supplementation industry. What makes the krill oil gaining its uniqueness are mainly phospholipids, or groups of organic chemical compounds, lipids, which, in addition to glycerol and higher fatty acid residues, contain the rest of phosphoric acid. Omega 3, or mainly EPA and DHA acids, support the proper functioning of the cardiovascular system, may support the reduction of triglycerides in the blood, have anti-inflammatory or even anti-depressant effects. We believe the opus magnum of OstroVit Krill Oil is the content of astaxanthin.

Astaxanthin is undoubtedly an effective anti-inflammatory. Currently considered one of the strongest antioxidants.

Use 1 serving (2 capsules) daily, preferably with a meal.

WARNINGS: Do not exceed the recommended daily dose. Do not use the product as a substitute (replacement) for a varied diet. Recommended are balanced diet and healthy lifestyle. Do not ingest if you are allergic to any of the ingredients. Children, pregnant or nursing woman must not take the product. Keep out of the reach of children. 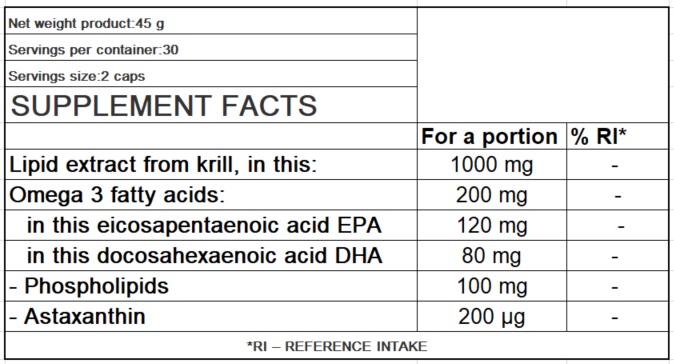 4.86 / 5.00 86 reviews
IdoSell Trusted Reviews
2021-04-09
Great service
2021-05-19
Easy to Order , Great Competitive prices and quick delivery.
View all reviews (86)
This page uses cookie files to provide its services in accordance to Cookies Usage Policy. You can determine conditions of storing or access to cookie files in your web browser.
Close